Wisconsin/Minnesota. North of the Twin Cities. Garrison Keillor’s country. Lots of little lakes lined with woods and farm fields. Typical idyllic farm compounds surrounded by basically one or two things: corn or soy. Midwestern folks… the best in the world. Found this John Deere 750 grinder/mixer on Craigslist… along with some others. Emailed and talked to folks. Emailed and talked to more folks. Finally settled on the Deere… I’ve had good luck with the green machines… but you do pay more for that green paint. So off to Wisconsin I went to get me a brand new 1970’s era green grinder/mixer with an 18-foot unloading auger and everything! 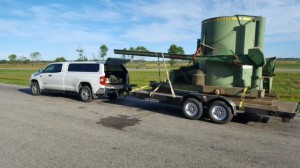 I didn’t have much time… I was after all in the middle of moving about half of the Berkshire clan back into their Montana lair… so I took about a 20-minute nap in the 18 hours or so I needed to get to Clear Lake, Wisconsin. The long-haul trucking gig I did before college raises its head again from time to time. When you start seeing animals from the Serengeti running along the side of the road you need to know that this is the time to take a nap.

I have this 18-foot flatbed trailer… but it’s of the car hauler variety which has caused me an unreasonable amount of grief in all the years I’ve had it… it’s the fenders, see… makes it tough to get anything on or off of that dead zone between the fenders. Animal raisers, hay handlers, grain haulers take note: Don’t get the fenders! So, the fender grief began anew… Old Floyd, the once proud owner of the green mini monster with seemingly one or two augers on each side, judiciously measured every angle of the big Green Machine and reported these figures to me before the journey… ok, with the tires off it was 76 inches wide which would fit nicely between the 81 inches that exist between those fenders. Well, upon rolling into the Floyd compound I could see it right off… there was no way that thing was going onto my trailer. Sure enough, the unit turned out to be about 86 inches wide hub to hub with the wheels off. Here I was 1,300 miles from home for only one reason… to pick up this big steel tub full of augers… and it wasn’t going to go on my trailer!

The old manager in me starts kicking into gear, somewhat rusty gears but they’re still turning… First, what are the resources at hand… there’s 70 year young Floyd, still in good shape… who has a bobcat and ample tools laying around… and he is a farmer right, so that just automatically means he’s a resourceful dude… although it turned out he spent much of his life as a used car salesman… hmmm… Then Fred showed up… a mechanical engineer… but I didn’t know that right off… and Mark the neighbor… this wiry fellow that was just a bit too enthusiastic about everything. To summarize… it was me, farmer/car salesman Floyd, Fred the mechanical engineer and Mark the nuclear reactor for a neighbor. Priceless… and perfect.

Off the team went on the journey to make the impossible possible. The first hour consisted mainly of role definition. Who really knew what the hell they were talking about? Who would lead this rabble. After all the sure’s … I don’t know’s … maybe’s … we can’t do it that way’s … that’ll never work’s … the two finalists for leader of the group came down to me and the mechanical engineer, before I actually knew he was a mechanical engineer. Floyd just wanted to see the thing gone with money in hand, bless his heart. Mark lost all credibility from a leadership standpoint right off… but man he was ready to rock… extremely valuable. So, it was the engineer and I as finalists in the leadership selection process. Alright, now for the resume check… tell me Fred, what do you do? “Oh … I’m a retired engineer.” Oh. From that point on all the gibberish I’d been enduring from his direction gained clarity and I cautiously yielded the leadership role to him… not that I’d want to leave the fate of the world up to engineers, but we just had to see if we were going to solve the Great Loading problem… I needed to get back to my hogs! So, onward we went… Fred could be considered the ship captain, with me as the XO. He had the authority to fire the missile, but had to have my concurrence to do so.

And on we went… we developed our plan… removing the wheels, getting the thing blocked up so the hubs would clear the fenders, putting a round fence post under the tongue so we could push it forward with the bobcat enough, getting the unloading auger set so it would clear my truck and not get ripped off by an overpass… And after proper implementation of the plan… the old Deere was strapped down on the trailer tight.

Mark had to run… which I believe is probably his exclusive mode of mobility… I offered to take him with me back to my farm because I knew he could get done what would typically take me a month to do in about 2 days… he had to decline… had to train for some marathon or something… wow that made a trailer load of sense.

Old Floyd’s wife Faith Anne… whose name is so great I just have to say it again… Faith Anne… after we finally overcame the Great Loading… had an entire spread of cold cuts and lots of stuff from her garden spread out on this huge round kitchen table including this even bigger batch of fresh chocolate chip cookies she made in a wash tub… about a gazillion ounces of flour and so on. She gave me a ziplock of the still warm sand dollars from heaven for the trip of course. Fred the engineer had my entire journey around anything Minneapolis/St Paul planned out, printed and highlighted on 4 map quest maps … it took me 4 pages of map quest maps, numbered from 1 to 4 so I wouldn’t go backwards… to get that grinder mixer out of that country and onto the interstate unscathed. Floyd mentioned that I need not call him if I have any problems with the unit. Bless his heart. Faith Anne gave me one of those warm midwestern hugs. Bless her heart. When I pulled away from Floyd’s and Faith Anne’s driveway… feeling the weight and that very specific side to side rocking related to a high center of gravity (see Fred already had me thinking like an engineer)… I just knew I was not going to make it… and wondered how many tow trucks I was going to have to employ along the way to get it home.

It can’t, but must be done.

So… thanks to the mind of Fred, the economically driven inertia of Floyd, the brawn of Mark and the cookies from Faith Anne… the Big Green Machine landed in Bigfork unscathed.

After nearly a full day of unloading fun with a tractor that couldn’t pick it up other than one little corner at a time, all manner of jacks and profanity I got the wheels back on the thing and got it onto the ground.

Now I just needed an hour to get local barley in and 10 hours to bring cull peas in and then we would be rocking in the grain… no more expensive sacks of whatever from the feed store… no more grinding/ mixing in those little Italian grinders into minuscule buckets… no more soaking grain… no more going way out to get soy from those wonderful Hutterite folks… no more wondering what I have really. 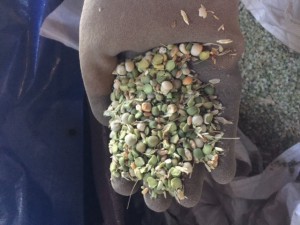 If I can just keep the old Green Machine running, we’ll be in good shape I think.

Straw up those hogs folks, winter is coming. I mean, I think it is.