Spring in the Northwest resembles winter in many other places … and 2012 has been a particularly wet one. Early spring is a challenge with melting snow/ice and what seems like a never ending weather pattern often called a ‘wintery mixʼ by those brave souls who try to predict the weather in Western Montana.  So, you have to be ready for anything and have boots with the air-bob soles for sure. Amazingly, I only took one hard fall on the ice … but it was a good one!

New litters began arriving in May, with Miss Pig leading the way with a litter of 9. Unfortunately, she left the farrowing hut (we do not use those hideous farrowing crates here that are commonly used in the industry that constrain the gilt/sow where she canʼt even turn around!), and dug a small ʻfoxholeʼ outside in the rain. Here she laid on three of the pigs and they didnʼt make it. So, 6 survived, 4 boars and two gilts and they are husky little rascals to say the least.

Suzy Q followed Miss Pig with a litter of 10 with 9 surviving. Both MP and SQ are red wattle/durocʼs and they were bred to our berkshire boar Broadway. Heʼs our pride and joy.  He, like most of our berks, was obtained from the Conover family in Iowa … the family that originally brought the breed to that state way back when.  Babe and Emily came to us from Les Tower in Ellensburg…   their father was also from the Conover family!

Other new arrivals to Wilderness Farms this year are three wonderful Jersey cows … Bossie, Lillie, and Megan … weʼre planning on trying our hand at some cheese making and other dairy products … but mostly now weʼre providing our hogs with some awesome milk in their rations … and they arenʼt complaining at all! 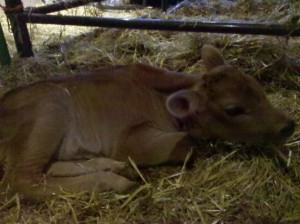 Megan (3 years old) will be having her second calf this coming November. Our youngest son Zachary (17 in September) was selected to play baseball on a great college prep team that will play in tournaments all over the west throughout this year and next …   Since it looks like Z will be going to college in Washington, we’ll be  focusing more on developing operations on our Enumclaw property in western Washington … in the shadow of Mount Rainier!

So, weʼll be busy this summer moving animals and such … with more litters on the way from Babe, Emily, MIss T, and BB … weʼll keep you posted!