Itʼs been rough around here the last couple months with consistent, relentless rain … but what should one expect in Western WA … right?  I think itʼs possible that our Berkshires will start quacking like ducks any day now. Remember, this is an outside operation … we have none of those fancy hog barns the industry uses in their concentration camps.

Farrowing season is upon us … Miss Pig and Cathy have had litters recently and Shiloh delivered a nice group of 11 on her first try! Suzie, Mato and Norma Jean will be farrowing in the next month, with Joan, Jett and Amy litters later this spring.

We still have a ways to go to get ʻdry lotsʼ set up back in the wooded areas so we can get the animals off the pasture areas to allow us to get these systems established.

Thereʼs a lot of clean up to do as well … parts of the farm were logged a few years back and thereʼs much debris to deal with and wood to mill up with our little chain saw mill.  At least weʼre not bored!

Now ʻdaylight savings timeʼ is here, and the days are getting longer thereʼs more time to get it all done … just keep the coffee and energy drinks coming, please.

Anyway, yesterday was a beautiful sunny day here, finally, and I spent the day building a new feeder pen in our garden area where we also have our chickens … they were still celebrating the arrival of their new cinder block/tarp shelter we put up for them this past weekend … we salvaged the roof frame from one of those cheap shelters we bought at Costco that the wonderful SE wind we get here from time to time so readily reduced to pasture abbatis … the same SouthEaster that snapped the top off a big cedar that bounced off a camper and impaled itself in the house like an arrow here a few years back … after all this place was coined ʻEnumclawʼ … a Salish description having to do with evil spirits and thundering winds.

Obviously I was under the influence of this all too infrequent sunny day, but as I was building a floor for the new hog hut, it dawned on me that these birds that were quietly clucking about were actually pretty cool … and understand that we love our Berkshire hogs here, but there is absolutely no way I would be able to do this work in such a peaceful purposeful manner if I were surrounded by any manner of hogs.  Hogs would be at my boots like they were apple sort-outs … they would be trying to remove the bottom threads from my jeans … the tools I had staged with appropriate juxtaposition would cause extreme fascination with our porcine friends … is there anything more fun than playing Randyʼs tool toss? Other than maybe Randyʼs tool ʻhide and seekʼ … perhaps an ʻIndiana Jonesʼ of the 22nd Century will discover archaeological wonders here that these hogs have so joyfully buried.  Iʼd bet a good set of fence pliers would be worth at least a hundred bucks in the 22nd. 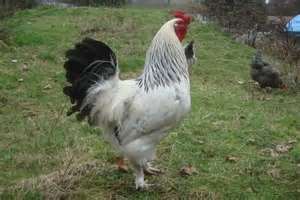 So, I enjoyed hanging with the chickens.  Our flock consists of mainly the Light Brahma variety, with a few Rhode Island Reds and Barred Rocks that have been with us for many years.  When we got the Brahmas … a beautiful large heritage species … we got a ʻmixed runʼ, meaning both sexes were present in about equal numbers. We did this with the thought that we would select the best rooster and put the rest in the freezer … well, ʻbutcher dayʼ has come and gone now many times and several of the big boys remain.  Whatʼs amazing about this is these guys arenʼt beating themselves into submission … which is my experience when thereʼs more than one rooster in the hen house … certainly thereʼs occasional disputes and brief ʻtalon-i-cuffsʼ but these altercations are far from the lethal ones I would expect.  So, we have several roosters competing with Greg and Barbaraʼs peacocks down the road for the pole position on the neighborhood soundwave … but the Stellarʼs Jays readily mock them as a reminder to all of us that these domestics are truly out of place here in the foothills of the Cascades.

Weʼll do all we can to reconcile these differences.