This summer really has been the mother of all summers… as hot as any summer I can remember while growing up near the foothills of northern California.  Grass that was lush and green in the spring is now as brown as that summer CA grass I grew up around.

But this is the Great Northwest… famous for its misty cool summers that make you yearn for that endless summer… and as green as a fresh college graduate… all year round.

A couple weeks ago I was coming across Eastern WA and it was 114 degrees near Ritzville… one hundred and fourteen degrees!!  That’s Las Vegas weather.  Phoenix heat… both places I want no part of in July.

Hogs don’t like the heat either… in fact, they like it lots less than we do because they can’t sweat like their human associates do.   And Berkshires are yes… black… so they absorb all that beautiful sunlight in ways we would never understand.  That’s great in January but a real problem in July.

So, what is a Heritage Hog Farmer to do…

Out in the open we put up those 10×12 tarps you can get at Costco in a two pack for about 20 bucks.  And we make sure Plenty of cool water is available… if you use plastic drums and nipple waterers like we do… you shouldn’t rest easy if the drum is full… that water gets Hot in those things while in the direct summer sunlight.  Keep them cool with fresh stuff daily.  Get out there with a hose in the afternoons and water your porcine friends down liberally.  And it’s fun watching these rascals roll and play around in the water pretty much like we did as kids in the sprinklers and shooting down lawn water slides.

So, as the woods and grasslands burn from California to Montana, and even in the perennially soggy Olympics this year!…  we’re scrambling to keep our Berks cool enough to survive this unprecedented brutal onslaught of sun and heat.

But as they say daily on Fox News … or maybe it was a Senator from Oklahoma … or both… our earth isn’t warming up folks… the oil industry says it isn’t so, so therefore it isn’t so.

Or at least, it isn’t our fault. 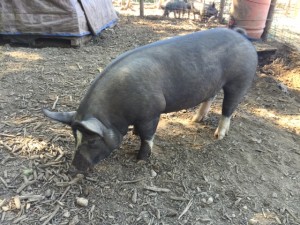 Enjoy your hogs.  Scratch their ears.  Love them and they’ll love you back.